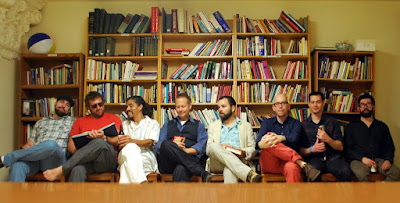 The eclectic group releases its third album, "A Series of Accidents," on April 22. To celebrate the release of the album, the band will perform at The Cubby Bear, 1059 W. Addison St., Chicago.

Doors open at 7:30 p.m. and tickets are available at www.ticketweb.com.

Q - Great talking to you again. Of course, the group's third album, "A Series of Accidents," will be released on April 22. In sitting down to make the album, what were your goals and do you think you accomplished them?

Mason - Thanks for having us back, Eric. Since the last album, we made some changes to the band to put more focus on the rhythm section.

We added Gregorio Guadalupe (aka Mandingo) as a percussionist. His Caribbean and reggae chops are well known around Chicago, and he's really helped move us toward a more complex and interesting sound.

After losing our longtime drummer and pal Kevin Garcia to downstate Illinois, we brought on Ivan Sosa (from Pinto and the Bean), who has really bonded well with Mandingo, drummer-wise.

We've been called "Mexi-Americana" before. I think we were always after a sort of Caribbean Mexi-Americana concept--heavy, danceable rhythms, melodic horns and a sing-along Americana/folk song structure.

That's where we're headed, I think. The goal was to move more in that direction while remaining honest in our playing - not imitating, not mimicking - I think we are finding our collective middle.

Q - Were you trying to build off your two previous efforts? Is there a story behind the name of the album?

We tried not to enforce any style rules or templates. Doesn't make booking easy, by the way.

But it keeps the band interested and, hopefully, interesting. That said, we've found ourselves in front of some confused audiences over the years. They see the mandolin, they overlook the Gwar shirt.

These are songs that could be read as fate, or as providence, or as karmic injustice. They can seem kind of sad and hopeless in that regard.

I don't think we mean them that way at all, though. "A Series of Accidents" implies randomness, not inevitability.

A series of cosmic accidents sparked life on Earth, so, you know, you'll get over your ex-boyfriend. That's a hopeful message.

Q - The second song is "Giles Cory." Is that a reference to the Giles Cory accused of witchcraft along with his wife during the Salem Witch Trials? How did his story inspire the band to write the song?

Jay - Yes, it's one of the weirder moments in history.  Madness in individuals is rare, but in groups it can often be the rule.

I think America is generally a tolerant place, but we just seem to have these moments of intolerance where a group mentality can take over and things go off the rails. In the summer of 1692, dozens of people, mostly women, were executed on suspicion of witchcraft.

Giles Cory was unique in that he was male, and that he was pressed to death with stones rather than being hanged as the others were. Supposedly when he was asked to confess to witchcraft with stones applied gradually to his chest, all he replied was "more weight!"


It is a rather unique way to tell judgmental fanatics where to go. To me, it's a great story about individual resistance to intolerance and oppression.

This old man who could have probably escaped death preferred to die rather than contribute to the collective insanity and myopia of a paranoid and fanatical society. That by itself makes him a bad ass deserving of his own song.

I believe there is a Swedish or Norwegian black metal band that did a song about him a while back, but I can't say I've heard it.

Q - As far as writing is concerned, is it a collaborative effort between the members? With such a large group, is it ever hard getting everybody on the same page?

Mason - Well, if everyone isn't on the same page, that usually means we move on to the next song idea. Our best songs are the ones where everyone contributes ideas, changes things up a bit.

I don't think we have any that are driven by one songwriter. That does, oddly, tend to lead to some variation in style.

I think we've tamed some the genre-hopping from the last album, but a lot of that is in picking songs for this album that work together.

Q - Which do you like better, working in the studio or playing live?

Mason - Given the time and the money, I think we'd really like the studio experience. There are eight of us, and all of us play different instruments.

Several of us have production and recording studio engineering experience, so to have the opportunity to really dive into an album and develop the songs slowly is a lovely idea. But that's not reality for most musicians.

The album is not really a profitable item, especially if you take a big chunk of a year spending money in a studio developing it. That's a year you haven't been onstage.


It's a product people are streaming online for a fraction of a penny. So, you're forced to do your best as quickly as possible.

We were lucky this time. We worked with a studio that was tireless, that really pulled strong performances out of us.

I'm very proud of this album, but I'm not sure that experience was really fun. It's like flying- it used to be luxurious and they'd serve you chicken cordon bleu.. now my knees hurt and they want eight dollars for some Go-gurt.

Playing live will always be fun. Playing live is like sex. Sex used to be fun, sex is still fun.

Nate - I think the Chicago music scene has always had a come-as-you-are attitude, which could be why we've seen the germs of so many musical movements start here. House, punk, hip-hop, indie rock - Chicago musicians are innovators, and they're not afraid to push their fans in singular and potentially alienating directions.

It's cliché to say that your band struggles to fit into a specific genre, but we incorporate elements of folk, punk, country, zydeco, funk, and rock 'n roll. I don't think music fans in Chicago care about labels.

They just want to hear something that moves them, inspires them, or makes them think. I hope that with this new record, we can accomplish all three.

Q - What does the rest of the year hold for the band?

Mason - Good weather. Baseball. Outside music. Time at the beach. Some grilled meats. Some time on the road. And an election. Looking like a pretty good year.
Posted by Eric Schelkopf at 7:10 AM