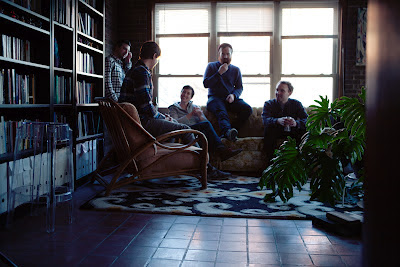 After the breakup of Chicago-based band Bound Stems,  frontman Bobby Gallivan wasn't sure what he would do next.

Fortunately for all of us, Gallivan decided to form a new band - Like Pioneers - with a few of his bandmates from Bound Stems. The group has released its sophomore album, "Oh, Magic," and will perform June 8 at The Burlington, 3425 W. Fullerton Ave., Chicago, as part of a record release show.

The Runnies also is on the bill. Doors open at 9 p.m. and a donation of $5 is requested. More information is available by going to www.theburlingtonbar.com.

I had the chance to interview Gallivan about Like Pioneers, www.likepioneers.com, and the new album.

Q - I understand that after Bound Stems broke up, you didn't think you would make music again. What changed your mind?

I figured I'd make music again, but didn't know if I'd be playing in a band again. I don't know if there is a singular event that changed my mind.

So when I decided to rent studio time to work on songs, it seemed natural to invite folks that I'd played with and worked with in the past.

Q - Four ex-Bound Stems members are in the band, including yourself. Was it easy getting together with your former band mates? How is the band's chemistry these days? What do you think the non Bound Stems members contribute to the band?

The current line up has 3 ex-members of Bound Stems.  Dan Fleury is busy being an amazing dad, and he didn't think he'd be able to give any sort of time commitment.  He's still with us in spirit!

Despite the loss of Dan, it's been great working together. Jesse was in my favorite Chicago band, the Narrator, and he also ran our old label (Flameshovel Records).

And our bands used to play around town with Matt Holland's band, Spiller Whale, and Matt used to work at Flameshovel too. So we were all pals before this and had plenty of shared experiences, so it just seemed to work.

And their contribution to the band is immeasurable. Jesse sings lead on half of the songs, and it seems like every guitar hook is one of his leads. And Matt is such a rock solid drummer.

We wrote this last record together, and all five of us has an equal say in this process.

Q - Even though "Oh, Magic" is Like Pioneers' sophomore album, I understand the band is treating it more like the band's first album. How has the band changed since first forming? What goals did you have for the album?

Yeah, our first record wasn't written as a band. There was no band.

So when we solidified our band as a five piece, it felt weird to call "Piecemeal" our first album. The album was a collection written by various people that we fleshed out in the studio.

"Oh, Magic" is so much different.  It was the result of all five of us writing and playing out for a year.

Ideas were sparked in the practice space, and structures were worked out over the course of several weeks and for a couple of songs, months.

The goal for the record was to come up with something that felt representative of what we sounded like. And I feel like we accomplished that.

Q - It seems as though there might be a story behind the band's name. Is there a meaning behind the name Like Pioneers?

The name comes from a self-depricating joke.  Some of us were hanging out, talking about the music that we were making, and Radz's wife said, "It's like you're pioneers!" So we took it from that phrase.

Q - Vocals on the album are shared among three members. How did that come about and are you happy with the results?

We just kind of sing leads when it feels right, and it just sort of worked itself out. There was a song we had that I took a crack at and couldn't come up with anything so Janie took the lead.

If we were playing on something and one of us felt inspired to sing, we'd just kind of call it out and take it from there.  I think we're all fans of each other, so that helps.

Q - I understand the band wants to do a lot of touring this summer. Do you think it's still important for bands to tour, even as there are ever increasing ways for people to hear music these days?

We're actually not touring all that much this summer. We're heading out to New York for a couple of shows, and might do some Midwest stuff, but nothing huge.

I think it's important to tour. And not just to get your music out, but also to perform every night together. I wish we had more time to tour on this record, but it looks like it probably won't happen.

Q - Where do you see Like Pioneers fitting into the Chicago music scene?

I never know how to answer this question. It kind of felt like an entirely new universe when we started playing again, and it still feels like we're in the process of introducing ourselves to Chicago, even though we've been around for a bit.
Posted by Eric Schelkopf at 9:39 AM