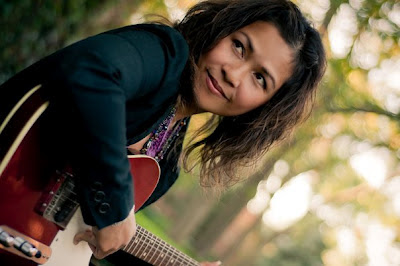 She has been described as possessing one of Chicago's most treasured voices.

Her latest effort, the EP "Someday Afternoon," moves Anna Fermin into more of a pop direction than the alternative country sound she established with her band Trigger Gospel.

The show starts at 7 p.m. and tickets are $22, available at www.oldtownschool.org.

I had the chance to talk to Fermin about her latest musical endeavors.

Q - You move into more of a pop direction on "Someday Afternoon." Was that a new challenge for you, to do something a little more pop oriented?

I think the biggest challenge for me was deciding to do a project without my long time band Trigger Gospel.  I had been playing with these guys for almost 15 years and I really felt it was time for me to collaborate with new musicians.

As far as taking on a more pop direction, I grew up in the 80's so pop music was a staple in my house. It seemed a natural progression for me.
Q - You worked with Doug McBride, who has worked with other musicians like Buddy Guy and Rachel Yamagata. How did you hook up with him and what do you think he brought to the project?

I had heard about Doug for years and the work he'd done with the artists you mentioned as well as bands like Veruca Salt , Fall Out Boy and many others.

It was funny because we had a number of mutual friends and artists we'd worked with over the years, but the two of us had never met. I reached out to him, first to mix "The Contender" and then produce "Someday Afternoon."

Doug is a great talent with the ability to pull your songs into directions you never thought they could go. It was exciting to hear my songs take shape and breathe in ways I hadn't imagined.


Q - You have been described as "one of Chicago's most treasured voices." How does it feel being described that way? Are there any Chicago musicians that you admire in the same manner?

It's certainly an honor to be described as such. Especially since Chicago is filled with some incredible talents. Some of my favorites include Patricia Barber, Janet Beveridge Bean, Steve Dawson & Diane Christiansen, and Robbie Fulks.

Q - The music industry has changed drastically since you first got on the scene. Is it easier or harder to be a musician these days? What are the biggest challenges in being an independent artist?

Even though the music industry has changed so much over the years, the challenges of being an independent artist are still the same in many ways. When I first started out I was mailing postcards with handwritten addresses to the folks on my mailing list.

The Internet and social media have made it easier to get the message out to your audience, but you still have to do the work. You still have to connect, and I think that might be even harder to do because you're competing with messages and media and ads, not just from other musicians, but from anyone who's trying to "sell" something.

I have found that the music part of being an indie artist is easy, it's the business part (self promotion, booking, etc) that's the most challenging. And think that's always been the case.

Q - You released five albums with Trigger Gospel before you decided to go off on your own. Was the time just right for a solo career? Any chance for a Trigger Gospel reunion?

Yes, the time was right for me to go solo. Again, I was really feeling the pull to collaborate with other musicians, and I wanted to branch out from being known strictly as a country/Americana artist.

I felt I had more to say, or I guess in my case, to sing. Trigger Gospel is currently on a hiatus, so yes, there is definitely a good chance of a reunion.
Q - You also will be part of the theatrical production of "Nickel History: The Nation of Heat" this summer. What intrigued you about the project and would you like to do more theatre in the future?

A number of things intrigued me about this project. The first thing was getting the opportunity to collaborate with the incredibly talented multi-instrumentalist John Rice.

Needless to say, I'm thrilled to be a part of it. And as for the second part of this question, ask me again after the production closes on August 5.

Q - You have opened for many notable musicians, including the late Johnny Cash and David Crosby. What did you learn from those experiences?

I learned that no matter how much fame or fortune you acquire, good people always remain good people.  Mr. Cash and Mr. Crosby were and are good people.  You could tell they really loved what they did.

And my mantra has always been, do what you love and the rest will come.
Q - Steve Earle also has been a big influence in your career, and you also had the opportunity to open for him. What was that experience like?

It was a bit surreal for me, exhilarating and terrifying.  I was pretty young, and it was hard for me not to be starstruck.

But he was kind and friendly when we met. Though I have to say I don't remember much of our conversation, because all I could think the whole time was, "Oh my God, I'm talking to Steve Earle."

Like I said, I was pretty young and starstruck.

I really just hope that I'm known and fit in as an artist who really loves to write and sing great music.  I think Chicago is a great place for young and emerging talents.

It's a fertile scenes with musicians in every genre encouraging you to grow your songs and style.  I don't think you find the kind of competitiveness here that dominates scenes in Nashville, L.A. and New York City.
Posted by Eric Schelkopf at 10:39 AM