A few of Michael Heaton's musician friends performed Aug. 29 at the Peg Bond Center in Batavia as part of a tribute concert to the late musician. The concert capped a fundraising effort by family, friends and fans to create a permanent plaque at the Peg Bond Center that will highlight Heaton's life, music and philanthropy, as well as create a Michael Heaton musical scholarship, which will be awarded annually to a local student.

The scholarship will provide the student with a new guitar and a year of guitar and songwriting lessons. Rick Cremer of North Aurora-based Cremer Guitarworks is supplying the guitars, and Jeff Matters of Music Matters School of Music in Batavia is providing the lessons. The scholarship will be managed by the Batavia Foundation for Educational Excellence.

Posted by Eric Schelkopf at 12:30 PM No comments:

By Eric Schelkopf
It only makes sense that Lil' Ed and the Blues Imperials is playing Saturday at The Venue in downtown Aurora as part of a series of concerts these weekend celebrating outdoor concerts returning to Mundy Park, which is adjacent to The Venue.
Lil' Ed Williams and his bandmates were one of the last bands to play in front of a live audience at The Venue last year before the pandemic forced the music venue to switch to live streaming concerts. For those ready to hear live music again, Williams and his band will provide plenty of electricity.
The show starts at 8 p.m. and tickets range in price from $20 to $25, available at The Venue's website, themusicvenue.org.
The grand reopening weekend will wrap up on Sunday with a musical tribute to two of The Beatles most beloved albums, "Rubber Soul" and "Abbey Road." More information is available on The Venue's website, themusicvenue.org.
Posted by Eric Schelkopf at 1:35 PM No comments: 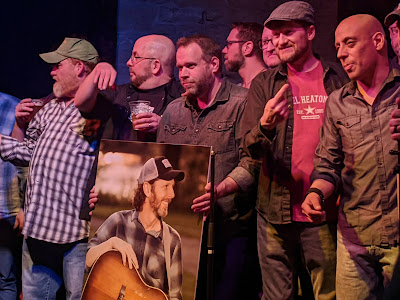 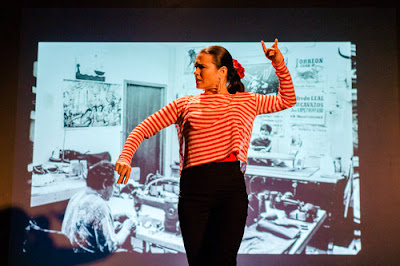 By ERIC SCHELKOPF
Dance meets photography in Clinard Dance's latest project, "Everyday People Everyday Action."
Clinard Dance and Japanese photographer Akito Tsuda have teamed up to create an interdisciplinary work based on Akito's photos of Chicago's Pilsen neighborhood in the early 1990s.  The show will premiere at 2 p.m. Nov. 24 at The National Museum of Mexican Art, 1852 W. 19th St., Chicago.

I had the chance to talk to Clinard Dance artistic director Wendy Clinard about the show.


Q – Great talking to you again. Of course, "Everyday People Everyday Action" will premiere Nov. 24 at The National Museum of Mexican Art in Chicago. How did you team up with Akito Tsuda and what is the idea behind the show?
In early 2016, I first saw an article in the now-defunct magazine "Chicago Voz" about the Japanese photographer Akito Tsuda's photographs of Pilsen in the early '90s when he was a student at Columbia College. I felt an immediate spark of recognition as a creative person who has raised a family and developed my art in the neighborhood; I founded Clinard Dance in 1999.
https://vimeo.com/364839477
I reached out to Tsuda, who hadn't been back to Chicago in about 25 years. At the same time, Cultura in Pilsen had reached out to Akito and in fall 2017 Tsuda returned to Pilsen to share his photos and, at this point, we started our exchange on this interdisciplinary project.
The idea behind the show is to create a work that tells a story about everyday people and their everyday actions in service of celebrating and magnifying ordinary and everyday beauty. How do we do this?
By using the flamenco interplay between singer, guitar and dancer, but in this work it is between photo, dance (hip hop and flamenco) and music (flamenco, beatboxing, Son Jarocho and violin).
Q – How did you like collaborating with Akito? Do you see more collaborations with him?
Our physical time together has always been limited but the time we have spent together, writing each other and working with his photos now for the last few years, has been more than adequate in cultivating a depth in friendship and an understanding both of the photos and photographer while living and walking in Pilsen in the day-to-day sense.

I carry these images everywhere I go and, as a result, I can see new ones all the time. We still have the tailor shop, laundry mats, families sitting on porches, basketball games, and the unsuspecting smiles when passing each other on the street. Akito and I are talking about his dog photos; let's see if that makes for another project?

Q – What would you like people to get out of the show?
One thing a lot of my work has to do with – and certainly this piece is not different – is people matter and caring for each other is how that functions. People all over the world create and thrive on a sense of belonging and, many times, the way people create this is by seemingly ordinary and simple ways and, in Pilsen, just walking around, sitting on porches, talking to our neighbors, being curious about each other instead of fearful has always been part of the neighborhood.

Making this piece has something akin to this too – we all show up with our disciplines at the service of the photos and we see where we connect; how an image inspires a sound, a movement, etc. and when we work this way we make something entirely new because we are exploring the capacity that each discipline has to interacting with each other.

And because we are all out of our comfort zones in this mixed disciplines piece, the method is simple – we fool around, go back and forth and the piece discovers us.

Q – Of course, Clinard Dance is also celebrating its 20th anniversary this year. Has Clinard Dance lived up to your expectations? What dream projects do you have?
Clinard Dance has allowed me and all the fine artists who we've worked with a platform to make originally devised artworks and, at the same time through the school and Flamenco Quartet Project, to hone in as craftspeople on the art of flamenco; I am grateful.

We have just been awarded a 2019 MacArthur International Connections Fund. We will be working with Compania Elena Andujar from Madrid, Spain.

We will be working with seniors in Chicago and gitano youth in Spain in one component of the exchange.
Posted by Eric Schelkopf at 11:01 PM No comments: