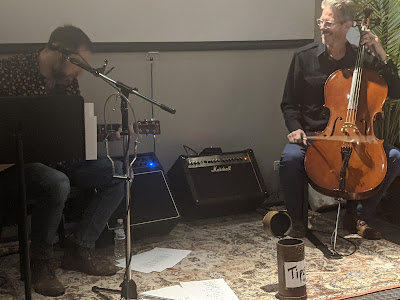 By ERIC SCHELKOPF Local musicians Noah Gabriel and Ryan Carney provided a night of many memorable moments during their Nov. 12 show at Brother Chimp Brewing in North Aurora. Gabriel is a singer-songwriter who writes honest, heartfelt songs. And Carney and his cello helped to wrap his songs in another emotional layer. That was most evident on songs like "Powder Blue," which Carney helped send into the atmosphere with his riveting finger work. Gabriel and Carney also provided innovative versions of songs like "Black Hole Sun" and "All Along the Watchtower." Let's hope we will see more collaborations between the two, both on stage and in the studio.

Posted by Eric Schelkopf at 7:12 PM No comments: