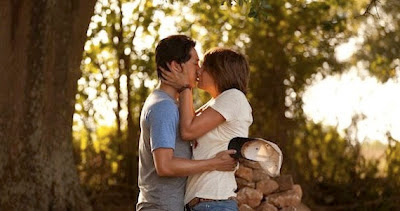 It's no surprise that Steven Yeun and Lauren Cohan - who play Glenn and Maggie on the popular series "The Walking Dead" - drew a captive audience during a Q&A session at the recent Chicago Comic & Entertainment Expo.

The two provided many details into the filming of the series (such as the season finale of Season 2, where Rick ends up killing Shane), and provided clues on what will come next in the series.


Q - What was the atmosphere like filming the season finale of Season 2?

Lauren - We didn't realize the effect the season would have on us. We become so close working on the set. We are the "Walking Dead" family.


Q - Did you agree with Rick's decision to kill Shane?

Lauren - I think it had to happen. I think Shane wanted him to do it.

Q - Why do you guys always refuse ever at any point to say the word zombie? You use words like walkers.

Lauren - Because the word zombie doesn't exist in our world. There are no zombie films. We don't have George Romero. We don't have any of that. So we just call them what they are doing.

Steven - I think it's mutual. I think the way that things are heading, it's more of a team. It's not necessary to bash this brontosaurus and bring it home.

I think that's the beauty of the relationship. It's two people who love each other doing cool shit.

Q - What do you do after an emotional scene?

Lauren - You don't really come down from any of it until the season is done.

Q - Is the zombie stuff scary for you in the moment?

Steven - The actors who play the zombies are so good.


Q - Will you and Maggie tie the knot later on in the series?

Steven - We really don't know. We have no scripts. That happens in the comics.

Q - Is Glenn ever going to take over the group, because he's obviously the sanest one.

Steven - I don't know. I think the trajectory that Glenn is headed is testing himself more, looking out for the people he cares about and trying to do still what's right to him.

Now that he has someone to live for and now that someone has him to live for as well, it's going to be a nice scene.

Q - Do you fantasize in real life what you might do when it comes to your character?

Lauren - I feel like I could be pretty similar to the way Maggie is. She's tough when she needs to be and she gets the job done.

I definitely want to pick up as many skills as possible before the apocalypse happens. Being on the show does remind you of the things that you need to know for survival, like how to build a fire and shoot a gun.

Steven - I was raised in the rough and tumble streets of  Detroit, Mich. It's as suburban as it gets. I know how to order a really solid plate of spaghetti.

I'd think I'd be helpful in a situation like that. I don't know if I would necessarily lead a group.

Q - So Lori is going to have a baby. Is it really a good time to have one, after the apocalypse, and are Glenn and Maggie about to volunteer for the cause? Are they going to have their own baby?

Lauren - I think we are going to see how Lori's goes.

Q - Do you have any advice for up and coming actors?

Lauren - Never give up. So many people will tell you no, 99 percent of the auditions will be no. You just have to believe in yourself.

Steven - Know yourself. Be self aware. And don't think that you know it all.

If you know you need to work on certain things, go work at it. Don't just let it go.
Posted by Eric Schelkopf at 11:29 AM