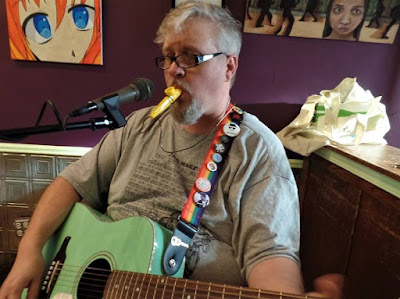 By ERIC SCHELKOPF
After taking the stage as an actor and comedian – including being part of the Geneva Underground Playhouse – the spotlight is squarely on Aurora resident Eric Peter Schwartz these days as a musician.
Schwartz is becoming a familiar face on stage as he is constantly performing. He will perform Aug. 27 at Uncommon Ground, (Edgewater), 1401 West Devon Ave., Chicago.
A full list of his upcoming shows can be found on his website at epschwartzmusic.tumblr.com.
I had the chance to talk to Schwartz about his music.
Q – Since 2013, you've been a solo acoustic artist, right? Prior to that, were you playing with a full band?
Before that, I was doing mostly theatre and sketch comedy stuff. I was writing songs behind the scenes. Every once in a while, I would go out and do open mikes by myself. But it was pretty rare.
Most of my time was spent writing or doing theater or sketch comedy.
Q – What made you want to explore music?
I really just wanted to go and do something by myself, where the only thing I had to worry about when I had a show was me. It was time to do some stuff on my own.
Q – How have you been enjoying it?
I love it. I always wanted to do this. Even when I was with Gag Reflex comedy group, I was trying to book us like a band.
I love going around and playing shows. I used to think it was a terrifying notion to just stand up their by yourself, but I've really come to enjoy it.
Q – What do you like best about the experience? Is it the interaction with the audience?
Interacting with an audience is great. If you're kind of playing background music at a bar, there's not a ton of interaction.
When I do have a show at a place like a coffee shop where people are actually listening, then yeah, interacting with the audience and talking to them and things like that, that's always great.
I love playing at Kiss The Sky record store in Batavia. The people who are there are there because they love music. In 2016, I did a little tour of record stores.
I took like a week, and did eight shows between Indiana, Illinois and Wisconsin. I just kind of went around to all these different record stores.
Most of them seemed to have plugged into the idea of also being a music venue for the local musicians. It's a good deal for record stores to do that with local musicians.
Q – I know that you were named songwriter of the year in 2014 by Twirl Radio. Was that a ego boost?
Mike Lidskin, who runs Twirl Radio, has been a big supporter of mine. I was surprised and yeah, it was a ego boost. Absolutely.
Q – You describe your music as kind of folky and kind of quirky.
I usually would put me with somebody like John Mellencamp or Paul Simon, kind of that folk rock and probably just slightly more quirky. I've got stuff that would probably fall within Warren Zevon a little more and some of his quirkier things.
Not that I'm as good as any of those people, but if I had to find where I lie, it's in there.
Q – Are you working on any new material?
I'm always writing. When a song comes to me, then it comes to me. And then I write it down.
I usually will try it out at a show, and if it's working, I keep it, and eventually, maybe record it.
Now that I'm doing this full time, I'm probably going to have to set aside time. That was the one thing
I started noticing that as soon as this became my job, the songwriting was slowing down because I was far more concerned with the fact that I would have to book a lot of shows and get paid.
But I'm always working on something. I carry notebooks around with me.
I have a little cassette recorder, and if I have just a little snippet of a musical idea, I'll record it on there. Or I will record it on my phone.
Q – Do you have a process for writing a song?
Sometimes I'll think of the lyrics first, other times, it starts as music and then I add lyrics to it.
It just sort of comes to me. I don't have a set time of day that I write, or anything like that.
Q – Do you think your music has evolved since you first started?
Oh, yeah, I think so. The performing itself has gotten better.
Over time, you're going to get better. The songs seem a little more polished when I'm done with them now.
When I'm done with a song and I'm ready to play it, it either feels more polished or I'm just more willing to play it in front of people.
There's been days when I've finished a song in the morning and I play it at a gig that night.
Posted by Eric Schelkopf at 5:19 PM No comments: 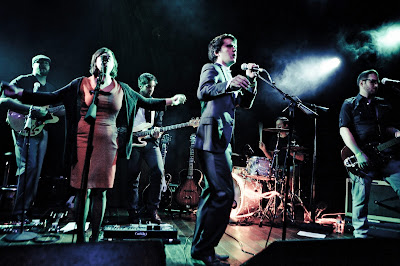 Martin Van Ruin  will celebrate the release of the album with a show on Aug. 17 at FitzGerald's, 6615 Roosevelt Road, Berwyn. Tickets are $10, available at ticketweb.com.

I had the chance to talk to Martin Van Ruin bandleader Derek Nelson about the new album.

Q – Your first album, "Every Man a King," enjoyed rave reviews. Did you feel any pressure in following up the album?

None at all. This whole thing is pretty free of pressure. If we feel any, it’s just about making sure that we’re making something that feels right.
Q – In sitting down to make the new album, what were your goals and do you think you accomplished them?

We wanted to write songs and tell stories that were somewhat appropriate for the times we’re living in. There are parts of music and songwriting that are universal and timeless, but we didn’t want to make music that was a tribute to the '70s, even though those influences will still come through.
Hence the name of the release,  "Current Day."

Q – Mike Lust recorded and engineered the record. How did you hook up with him and what do you think he brought to the project?

Lust is the very best. He goes way back with Pete Falknor (drummer/songwriter/everything else), and he records in the same practice space as us and has recorded us before.

So, it just made sense. It was good to have another songwriter in there to help guide things in the right direction.

We needed him, actually. We recorded in so many stops and starts that it wouldn't have worked without somebody who could pull it all together.

Q – Are you just concentrating on Martin Van Ruin these days? What do you like about leading this particular group of musicians?

I’m definitely not leading anything here; it’s a collective effort from all of us. We all just do whatever interests us.
What the seven of us share is a need to make music without wondering what we’ll get out of it other than the music. That’s enough.

Q – The band has been compared to Bob Dylan and Neil Young. Do you consider them to be a big influence on the band's music?

Yes, for sure. I think what’s drawn people to them for so long — I mean, the songs of course — but also that they’re free. They do what they feel like.

I remember seeing Neil Young do a show solo, and he had all these instrument stations set up around the stage, and after every song he’d just wander around in slow-mo and decide what to play next. It was like watching somebody rehearse, except it’s Neil Young.

Q – Do you have any dream projects or collaborations?
I've always been obsessed with T Bone Burnett, so he'd have to be high up on the list.
Posted by Eric Schelkopf at 9:56 PM No comments: