Midwest Hype is an appropriate name for a band that is creating a fresh buzz through its eclectic mix of funk, reggae, rock, jazz and hip-hop.

The band Otis is also part of the bill. The show starts at 9 p.m., and tickets are $10, available at www.schubas.com.

I had the chance to talk to Midwest Hype drummer Max Kepler about the band and its activities.

Q - The band's sound has been described in many different ways. How would you describe the band's sound? What made you want to create the sound the band has?
Yeah, lots of people describe our sound differently. The best way I think to decide is to see the live show. When I am telling people about it, I say a combination of funk, rock, reggae and hip-hop. We have coined our sound "Urban Garage Jazz" or "Urban Garage Rock."

We have always listened to lots of different music from both coasts and had an uniquely Midwest experience growing up by the beach (Lake Michigan). We wanted to write songs that combined a lot of sounds from the artists that we listened to including the Red Hot Chili Peppers, Steely Dan, Dr. Dre, Sublime, A Tribe Called Quest, Bob Marley and many others.

I think that we achieve that with Midwest Hype because I don't think anyone really sounds like we do.

Q - What was it like opening for the Wailers? Do you consider them a big influence?

Opening for The Wailers was amazing. They are such a good act and we were honored to share a stage with them.

We have been listening to Bob Marley, Toots and the Maytals and lots of other Island artists since we were all young. Playing with them made us realize how much of a rock band we are compared to them. We use use reggae elements, but what they do is so authentic and it was amazing to watch.

Q - You have a new EP, "Dayglow." What should people expect from the album? How did you hook up with  Steve Gillis?

The Schuba's release is going to be amazing and we can't for people to hear the EP. We met Steve through the band How Far To Austin. They have been great friends and opened a few doors for us. Steve was finishing their record when we started recording "Dayglow" a year ago.

Q - What was it like to be named last year as the "Best Band About To Make It Big." Did it put additional pressure on the band?

It's always nice when people recognize something you create and respond to it positively. We try not to get too caught up in expectations and always just try to write the best songs possible and have a great live show.

Q - Are you pleased with the impact the band has made so far? What do you think the band adds to the music scene in Chicago and Indiana?

We are pleased with what we have done so far. Opening for the Wailers and Girl Talk, and playing slots at Summer Camp, North Coast and the Indy 500 are pretty big accomplishments for any band.

I think that having Midwest Hype on any bill always adds a bit of fun. We always have a good time and hope that everyone else is having a good time too. We don't take ourselves too seriously, but we are serious about our music and how we create it and show it to people.

As long as we continue to have fun with this I'm sure we will grow and build. "Dayglow" is going to be a big next step.
Posted by Eric Schelkopf at 8:58 AM No comments:

Van Halen to play Feb. 24 at United Center in Chicago

Van Halen, with David Lee Roth back in the fold, will perform Feb. 24 at the United Center in Chicago. Tickets for the show go on sale Jan. 14. Read more:

Posted by Eric Schelkopf at 9:27 PM No comments: 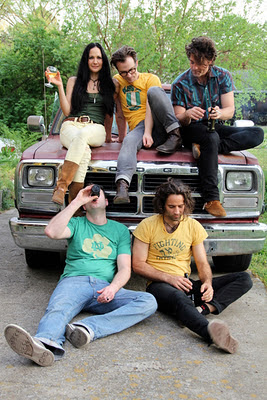 Most bands can't reproduce their live sound in the studio.

But Chicago band The Buddies does so in scorching fashion on its latest CD, "F*** The Buddies," released in August.

The band, www.candyappleandthebuddies.bandcamp.com, will take its unbridled sound to The Empty Bottle, 1035 N. Western Ave., Chicago, on Dec. 22. Dirty Pigeons, The Canoes and Ed Jurken also are on the bill.

The show starts at 9:30 p.m., and tickets are free to those who RSVP. More information is at www.emptybottle.com.

I had the chance to talk to The Buddies lead singer Coley Kennedy about the band and its activities.

Someone once described our sound as "a southern rock version of The Clash." I'll take that.

Q - You dropped Candy Apple from the band's name. Why? Do the members of The Buddies see each other as friends both on and off the stage?

Do we see each see each other as friends both on and off the stage? Yep. We were friends long before The Buddies started to make music together.

Q - Of course, The Buddies is comprised of members from Welcome To Ashley and Pale Blue Dot. How did the project come about in the first place? Was it a seamless transition? What was the goal in forming The Buddies?

I had several songs that I'd written in WTA that weren't quite WTA's style. I sent the Collins' (members of Pale Blue Dot) a tape of the songs, hoping they'd come up with some nice, mellow, roots-y instrumentation - banjos, mandolins, pedal steel, etc...and then we'd record the songs. I then flew to Nashville (along with Pete Javier from Welcome to Ashley), eager to record a "country" record. We tracked eight songs, unrehearsed, live and drunk, in 2 days - in the Collins' living room. It couldn't have been less country, (but) we called the album "Country Record."

Q - In sitting down to record "F*** The Buddies," what did you set out to do? How do you think it stacks up to your previous efforts? Did the finished product meet your expectations?

We set out to make a great record, and we did. And as far as the recording, it's about as real as it gets. We tracked all 12 songs in three days.

Q - Judging from the band's concert videos, it looks like you guys try to put a lot of energy into your shows. Your latest CD also has a live feel to it. Were you trying to capture the band's energy on the CD?

Yep. And it wasn't difficult to capture the live feel, because it was recorded live.

Q - Who are your biggest music influences and how do they fit into the band's sound?

The Buddies influences are The Pogues, The Replacements, The Faces and The Stones.

Q - What are the band's goals for the next six months?

We're making a video for "All The Beer Is Gone" in January in NYC. Aside from that, we will continue to tour, write songs and hopefully make another great record in  spring, 2012.

Q - Where do you see yourself fitting into the Chicago music scene? What do you think the band adds to the scene?

I don't know where we fit in the Chicago music scene, and I'm not sure what we add. I'd like to think that The Buddies add everything great that's been missing from the music scene for a long, long time.

Posted by Eric Schelkopf at 3:19 PM No comments:

Best known for his work with Howlin' Wolf, blues guitarist Hubert Sumlin was an inspiration to the likes of Keith Richards, Frank Zappa and countless other musicians.

Sumlin passed away on Sunday at the age of 80. Many of the musicians who shared the stage with Sumlin over the years will perform at 8 p.m. Dec. 13 as part of a benefit at FitzGerald's, 6615 Roosevelt Rd., Berwyn.

Donations will cover a portion of the expenses for his funeral and the rest will be donated to the Blues Foundation Hart Fund, www.blues.org/hart

More information is at www.fitzgeraldsnightclub.com.


Posted by Eric Schelkopf at 9:14 PM No comments: