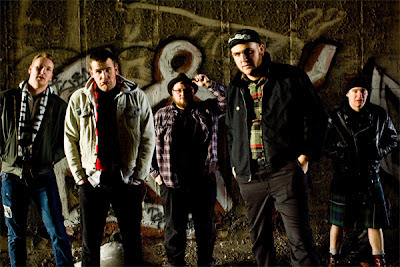 For Chicago Celtic punk band Flatfoot 56, playing together is a family affair.

Singer Tobin Bawinkel, 27, formed the group in the summer of 2000 with his brothers, Justin and Kyle.

Flatfoot 56 is currently touring across the country as part of the Vans Warped Tour, and will return home Saturday when the tour comes to the First Midwest Bank Amphitheatre in Tinley Park.

The show starts at noon and tickets are $34.25, available at www.livenation.com.

I got the chance to talk to Tobin about the tour and the daily grind of being in a band.

Q - How has the tour been going?

It's been awesome, man. It's been really fun, and it's been good exposure. A lot of our fans have been able to come out and rock out.

Yesterday it was about 95 degrees. You get used to it.

Q - I know that you had Shark Week when you guys played at Cornerstone Festival. Do you have anything planned like that when you play in Tinley Park?

Probably not. We have a 25 minute set, so it's a real quick, get on, get off type of thing. We're looking forward to going to Chicago, though. We're excited to go home to play.

Q- I suppose some people from the Cornerstone show might still have their cardboard sharks.


Q - Twenty-five minutes is not a lot of time. Are you playing a lot of music off your new CD?

Yeah, mostly. We have a few songs from each of the albums. We kind of feel it out, see what kind of crowd we have, and then tailor it specifically to what we see. You read T-shirts, you read the energy of the crowd.

Q - How are the new songs translating live? Are they fun to play?

Oh, absolutely. We're trying to do some new things, get new things to do the "Braveheart" to.

Q - How did that whole thing start, with the audience recreating that scene from the movie "Braveheart."

I think we just tried it one day, and said, 'Let's see if this works.' It just blew up and it was awesome. It's one thing that gets the entire crowd moving.

Q - So when you guys sat down to record "Black Thorn," what were your thoughts? What did you want to accomplish?

We wanted to get the idea out that the band has been maturing. We had a lot of new subject matter for the record, things we had been going through. We wanted to get down some good production, which I think happened. Johnny Rioux was involved in it from the Street Dogs. He had a lot of good insights. He has a long history of really good ideas.

We had toured with the Street Dogs about two years ago, and he said he would be honored to work with us.

Q - What did he bring to the table?

He brought to the table a lifetime of playing with some of the best bands in punk in the United States.

Q - Your schedule for the rest of the year looks pretty intense. For some stretches you don't even have a break. Do you like your schedule to be so intense?

We do and we don't. Being home is nice. It's nice to be around family. Two of us have our wives out on the road with us. It gets pretty intense, but you have to work. Punk rock is not necessarily the thing that everybody is clamoring for, so you've got to work and pay the bills and get your record out there and make sure people hear it.

It's kind of a daily grind thing. A lot of people who work in factories and stuff have to work a schedule that is ridiculous in order to make ends meet. I think that is the same thing for some bands. You have to keep going for it to stay afloat, you know.

Q - How is it like being in a band with two brothers? How does that work out?

It works well, honestly. We all get along with each other. I think working with two new members who joined in January, Brandon and Eric, it was kind of an adjustment. You learn how to work with your brothers and work with new people as well.

Q - How did the band form? Did you guys just decide to stay playing with each other? Did you have any goals in mind when you guys formed?

I was 17, Justin was 14 and Kyle was 12. We just wanted to play live shows. It wasn't like we had a goal of playing Warped Tour or anything. That kind of came as we started going to a lot of these events. It was just a desire to play at shows and it just kind of kept going.

Q - You guys grew up on the south side of Chicago. Are you all Sox fans?

All of us are Sox fans except for Eric. He's a Cubs fan. We were kind of suspicious of it at first.

Q - Who were your influences growing up?

Musically, we were really influenced by a lot of old British bands like Blitz. We also listened to a lot of New York hardcore stuff like Cro-Mags. We were also listening to a lot of traditional stuff. Obviously The Pogues are an influence for any Celtic punk band. You want to understand what the roots of this movement is, the scene it started in.

The first street punk show I ever went to was the U.K. Subs at the Bottom Lounge in Chicago. It was a life changing experience. It was part of a whole new world.

We played our early shows at a place called Rubes in Harvey. At the time, it was the only all-ages place that punk bands could play in Chicago. A lot of good shows happened at that place.
Posted by Eric Schelkopf at 12:51 PM No comments:

Good news for fans of North Carolina band The Rosebuds.

The band has released two tracks - a somber version of the classic Bee Gees song "Staying Alive," and the track "Secret Life of The Rosebuds" - for Hopscotch Music Festival, the new music festival in the band's hometown of Raleigh, N.C.

The tracks can be downloaded only at www.hopscotchmusicfest.com.

From Sept. 9 to 11, Hopscotch will gather more than 120 bands in North Carolina's capital city. On Sept. 10, (mark the date), The Rosebuds will play their only remaining show of 2010 with Broken Social Scene and Panda Bear.

“We’ve long felt that we were part of an amazing, if somewhat secret artistic community in the Triangle,” says The Rosebuds co-founder Kelly Crisp. “Now, people everywhere are starting to pay attention to bands we consider neighbors, friends and family. Hopscotch seems like it will bring even more of that attention. Worst case scenario, we’re going to have a blast.”

The Rosebuds will continue to release one archival track every week for the rest of the year via various online outlets in anticipation of their fifth album, which is currently scheduled for release in early 2011.
Posted by Eric Schelkopf at 12:28 PM No comments:

It's hard to believe that Ozzfest has been around for 14 years. Where has the time gone? On Aug. 17, Ozzfest will return to the First Midwest Bank Amphitheatre, 19100 S. Ridgeland, Tinley Park.

The show starts at noon, so make sure you get to bed early that Monday night (yeah, right).
Posted by Eric Schelkopf at 11:43 AM No comments: