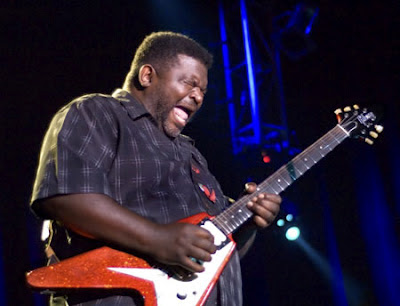 The family of late blues legend Michael "Iron Man" Burks has announced plans for a memorial and musical celebration on May 20. The event, open to the public, will take place rain or shine at 3 p.m. CST at Riverwoods On The Ouachita, Bradley Ferry Road, in Burks' hometown of Camden, Arkansas. Guests are encouraged to bring instruments, lawn chairs and coolers.

Burks died in Atlanta on May 6 and collapsing at Hartsfield-Jackson Atlanta International Airport following a tour of Europe. The 54-year-old Burks was signed to Chicago-based label Alligator Records.

In lieu of flowers, the family has asked that donations in Burks' name be made to the HART Fund of The Blues Foundation, which aids musicians with health care needs: http://www.blues.org/#ref=hart_donate.

"He was rushed to the hospital, but they were unable to revive them," Alligator Records owner Bruce Iglauer said in announcing Burks' death in a post on his Facebook page. "Michael was a sweet man, hugely talented and deeply soulful. I was proud to have him call me his friend."

The preliminary diagnosis for cause of death was a heart attack, according to Alligator Records.

I recently took another listen to his last album for Alligator Records, the appropriately-named "Iron Man," and I realized all over again why he was such a great musician.

Burks' intensely honest, soulful vocals are as much a part of the album as his trademark fiery guitar playing.

Burks received a nomination for the 2012 Blues Music Award for Best Guitarist.

Born in Milwaukee in 1957, Burks grew up immersed in the blues, and learned to play guitar at an early age. His family moved to Camden, Arkansas, in the early 1970s. There, Burks and his siblings helped their father build the Bradley Ferry Country Club - a 300-seat juke joint. By this time, Burks was fronting his own band as well as backing several of the blues and R&B greats that passed through town.

Burks left music to raise a family and returned to performing blues in the 1990s.  After self-releasing his first CD in 1997, Burks signed with Chicago's Alligator Records in 2001 and released three critically acclaimed albums.

GuitarOne magazine named his debut album, "Make It Rain," one of the Top 200 greatest guitar recordings of all time. He toured the world, headlining blues festivals, concert halls and clubs.

His status as an Arkansas musical hero was confirmed by his receipt of the prestigious Sonny Payne Award for Blues Excellence in 2006, presented by the Delta Cultural Center, and by his multiple headlining appearances at The Arkansas Blues & Heritage Festival.

Burks had just finished recording his fourth Alligator CD, set for release at the end of July.

Keep his family in your prayers along with Candye Kane, who recently underwent surgery for a recurrence of neuroendocrine pancreatic cancer.

Posted by Eric Schelkopf at 8:41 PM