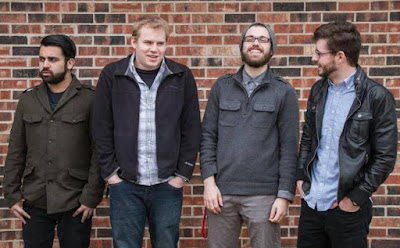 All the Wine's raw but melodic sound is in full flourish on the band's latest EP, "Heavy Lights."

The band will perform May 27 at the Bottom Lounge, 1375 W. Lake St., Chicago. The Flips, Pat Egan and the Heavy Hearts, Lever and Chase Aways also are on the bill.

I had the chance to talk to All the Wine singer/guitarist Danny Cozzi about the upcoming show.


Q - Great talking to you. You released "Heavy Lights" last year. In sitting down to make the EP, what were your goals and do you think you accomplished them?

I wanted to make a record with a bigger sound than our first EP. I was listening to Restorations a lot while writing those songs, and hearing how booming their guitars and drums are really inspired the energy we had going into the studio.

I think that comes through on the record.


Q - Is there a story behind the name of the EP?

A lot of significant moments in my life took place at night outside, usually during the summer. I try to recall every detail of those experiences when I write, and remembering how things appeared is an important part of that.

The way everything looks under a streetlight in your neighborhood or along an empty highway at three in the morning deepens that wistfulness for me.

Q - The band formed in May 2013. What made you want to form the band in the first place and what do you think each member brings to the band?

Really, I had just wanted to be in a band. I'd spent so much time thinking about pursuing music but not really doing anything about it, so when I met Matt, I brought up playing together almost immediately.

As a band we all blend together well.I'm an idea guy, and when something excites me I go to them saying, "I want to do this. I want to do this now and I'm not gonna stop until it happens."

Matt brings a lot of questions and pragmatism to what we're pushing for, which we need sometimes because I can be groundless if I get into my own head too much. Brandon, along with being an excellent guitarist, provides balance.

If we all disagree on something he's very good about finding a middle ground. As for Shabbir, man, he is one wild dude - and a fantastic performer. He brings a lot of energy to the band, both on and off the stage.

Q - Who are your biggest musical influences and how have they influenced your music?

We pull a lot of influence from melodic punk bands like Against Me!, The Gaslight Anthem and The Menzingers. The Mountain Goats became a big one for me in early 2015, and helped shape a lot of ideas on "Heavy Lights."

Ultimately, anything that's raw and emotive will have me thinking, "We need to do more of this." That happens a lot.

Q - Is the band working on new music? Should we expect a full-length album soon?

Yes, but not too soon! We're in the middle of writing the material for our first LP, and hitting the studio as soon as it's ready.

But, we will be releasing a new song called "Letters to Laura" this summer. I'm awfully excited to put that one out there - that song is special to me.

We love being a Chicago band. We feel right at home, because we've all been involved in music or going to shows around here for a long time.

And this city is so big that you're always making new friends wherever you play. It's kind of funny to go out and meet a band you've never heard of before despite running in the same circles.


Then at the next show, you'll meet another band and learn you have tons of mutual friends. I think those surprises are a big part of why we love it here.
Posted by Eric Schelkopf at 11:10 PM