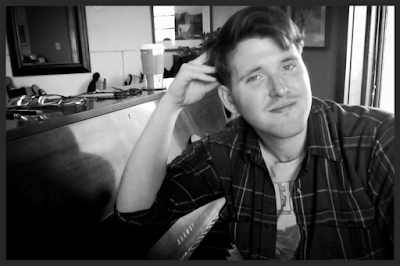 Musically adventurous singer-songwriter Sacha Mullin will celebrate the release of his solo album "Duplex" with a show on July 15 at Cafe Mustache, 2313 N. Milwaukee Ave., Chicago.

I had the chance to talk to him about the new album.

Q: Great talking to you. Your solo release, "Duplex," is being released this month. In sitting down to make the album, what were your goals and do you think you accomplished them?

Thanks for having me, Eric. My only real goal was to make a record I was completely proud of, and that certainly happened!
Q: Did you set about to do something different than your past efforts?

Yeah, I’d say so. You never really want to admit during any promotional stuff that you were unhappy with what you’re schilling, but I had so many hang-ups doing the making of my debut record, "Whelm." Promoting that record felt like torture.

First, let me say that one of my favorite things to do is be a backing singer. It’s a supportive, thoughtful art, and a real thrill when your voice resonates with someone else’s.

The music industry is essentially the opposite of those qualities, whether you take that literally or figuratively. "Whelm" was plagued with marketing, production, and general record label issues, and there I was, not really able to talk about that.

It’s so strange making such a thematically personal record, and feeling like you’re making it for the whims of other people. By the end of it, I bought the rights back, tried to salvage what I could, and ended up just wanting it over with. I felt isolated and fatigued.

I know fans get frustrated when they see artists dismiss their work. I want to clarify that I’m not dismissing my debut at all.

I really like "Whelm." I really love the songs, and I think there are a lot of good ideas — but maybe my ambitions got the best of me at points? I was stressed out, not realising that I was probably trying to do too much. I remember Todd [Rittmann] calling it “overwrought."

I made it my charge that if I was going to do the “solo thing” again, that I would do it with both a better head space, and on my own terms. I wouldn’t need to compromise my ideas, just learn to execute them better. So here we are with "Duplex," and I couldn’t be happier.
Q: The album was produced by Todd Rittmann. How did you hook up with him and what do you think he brought to the table?

I’ve known Todd for a while, and I’m lucky to call him my friend. We first worked together when he was producing stuff for Lovely Little Girls and Cheer-Accident, and we built a good rapport.

Both of us have similarly adventurous tastes in music, and love the same kinds of jokes. But otherwise, we’re really different people. I mean, he’s really cool, whereas I’m pretentious (laughs). What I think really brings us together is a mutual respect for each others’ work, and a fearless honesty.

Todd and I have had a lot of really good conversations over the years, and when it came time to sort my songs out, he was the first person I thought of. He's like an ambassador with sounds: he understands how to blend various competing elements to sound like they belong together.

Moreover, it's hard to articulate, but Todd knows how to find the darkness hidden beneath something in the most stunning way. You can really hear what I mean his Dead Rider material, and on Evelyn Davis’s "The Wit of the Staircase." Those are polar opposite projects, and yet there's his unmistakable sensitivity.

Working on "Duplex" specifically, he brought that all of that usual, uh, Toddness, plus some much needed patience, cheerleading, and a janky coffee machine with some Folgers.
Q: You have been a talent scout/casting assistant for the television show "America's Got Talent." What did you learn from that experience? Were you surprised at all by any of the acts trying to make it on the show?

Oh, lord. That part of my life was so long ago that it almost feels like another life. I got into that world through a friend.

We would scout various clubs at all times of the night. It was so surreal. It’s funny, actually, I was just going through a box and found my old “staff” shirt.

I loved that job and the people I worked with very much. But I’d always been a bit cynical on talent competitions. I mean, you see the same swooping, sparkly crane shots, the contestant’s struggles that are milked for ratings, and then just a general appraisal for the mediocre.

All the while you see supernaturally talented people that you scouted get turned away. I have a lot of conjecture about why that was a common thing, but that aside, I got so drained from seeing so many broken hearts.

That’s probably why I turned my focus towards education, so I could directly develop what it is that I saw in certain people.

What I learned most from that job was how to handle professional crises in a calm, timely manner. Oh, and that Sharon Osborne only likes “non-chain Italian food”. That’s important, right? (laughs)
Q - You are also a voice and talent instructor. What are some of the things that you try to convey to your students?

How to be a critical thinker. How to figure out the emotional rationale between theory and technique.

How to be kind to yourself. How to respect others time.

How to actually listen. A lot of general life skills that seem to get amplified when it comes to performing, really.
Q - What do you think of the Chicago music scene and how do you think you fit into it?

I fit in? When did this happen? This is a thing that has happened? (laughs)

Honestly, it’s really interesting, and I have to think about this a lot. I grew up in the Minneapolis scene, where shows are basically a kamikaze Whitman’s Sampler of genres, and I barely fit in there!

As an observation, I’ve found that I'm either too much or not enough of one thing for a lot of people.

I swear I’m not consciously aiming to be outside the box or whatever, I just have a lot of really disparate influences.

My former voice teacher Judi [Donaghy-Vinar] introduced one of my recitals by saying that I “liked the box OK." I still find pretty amusing.

After many years, I still don't really have a clear grasp on the scene here. Like, I get the politics of it, and the attitudes, but there's still a lot of mystery for me to uncover.

That said, moving to Chicago was really important for me. It’s here that I was able to grow into my own, work diligently, and collaborate with others who also liked just doing their thing.

The camaraderie I've found here has been inspiring.
Posted by Eric Schelkopf at 10:39 PM