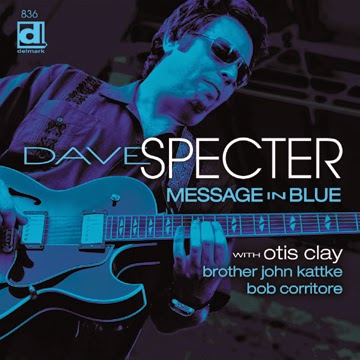 Chicago blues musician Dave Specter will likely garner even more fans with his latest album, "Message In Blue," released on May 20 on Chicago-based Delmark Records.

The album shows off his versatility, featuring everything from growling Chicago blues to Latin rhythms. Soul legend Otis Clay and other guest stars only add to the album's electricity.

Specter, www.davespecter.com, will perform June 11 at an album release party at SPACE, 1245 Chicago Ave., Evanston. Clay, as well as Brother John Kattke and Bob Corritore, who also appear on the album, are a few of the special guest stars set to appear in the show.

The show starts at 8 p.m. and tickets are available by going to www.ticketweb.com.

I had the chance to talk to Specter about the new album.


Q - "Message In Blue" was just released. In sitting down to make the album, what were your goals and do you think you achieved them?

It's my first studio recording in four years and I wanted to make an album that featured all the styles of music and blues that I love to play. I've been writing quite a bit of new music over the past few years and was glad to record eight original tunes on the album.

I'd like to think this is very much a Chicago music album - from soul to R&B, a touch of jazz and different shades of blues. That's the "message," I guess you could say.


Having Otis Clay as a featured guest on three tunes is a real thrill and I'm really proud of the tracks we cut with him. He was truly inspiring to work with in the studio - so much blues and deep soul power!

I think that Brother John Kattke is also one of the MVP's on the album. Check out his vocals on "Chicago Style" (co written w/ Bill Brichta) and Same Old Blues - not to mention his stellar keyboard work throughout the album.

Q - How did you hook up with Otis? Did you have him in mind for those three songs from the beginning?


I probably first met Otis around 25-30 years ago back when he was playing clubs around Chicago. I'll never forget seeing him with the legendary Hi Rhythm Section at B.L.U.E.S on Halsted.

Tad Robinson and I cut one of his tunes, "I Die A Little Each Day" back in the mid-90s on my "Live in Europe" album and I've sat in with Otis a number of times over the years.

I chose two of the songs on the album, "Got to Find a Way," which Otis first cut back in the 60s, and "I Found a Love," which has always been one of my favorite deep soul cuts. I thought Otis would be perfect covering it.

Otis chose "This Time I'm Gone For Good" and I'm so glad he did as his vocals really capture the soulful intensity of the tune. I've recorded with some great singers, but working with Otis is about as good as it gets.

Q - "This Time I'm Gone For Good" was recorded as a tribute to the late Bobby Blue Bland. What do you think was his greatest contribution to the music world?


Bobby Bland was simply one of the greatest blues and R&B singers of all time. He produced an amazing body of work with a long list of classic songs and albums.


His early Duke sides are my favorites along with "His California Album" and "Dreamer" albums from the '70s.

Well, we just played 14 shows in eight countries in 17 days - so I think I've finally recovered...

The European fans don't take us for granted. They respect the music and show it.

They also buy our albums and often show up to gigs with entire collections of your work wanting autographs. European audiences are generally more reserved and polite than here in America, which can be a bit of an adjustment.

Q - I understand you were first introduced to the blues listening to "The Midnight Special" show on WFMT. Was there any artist in particular that got you interested in the blues?

I grew up in a very musical home here in Chicago where my parents loved listening to WFMT's "Midnight Special" as well as Studs Terkel's radio show - where I first heard Big Bill Broonzy, Leadbelly, Josh White and Mahalia Jackson, who my dad really loved.

My older brother (who plays harp) also turned me onto the blues of Howlin' Wolf, Muddy Waters and Junior Wells - as he'd tell me about seeing them perform live when I was just a kid.

Q - You toured with the likes of Son Seals, Hubert Sumlin and Sam Lay before forming your own band in 1989. What did they teach you? How do you think your playing has evolved over the years?

Hubert taught me that developing an original style of playing is what it's all about. Don't copy other players. Be yourself.

Hubert was also so encouraging as I first toured with him and Sam Lay when I was only in my early 20s. It took me awhile to learn Hubert's lesson and I wish so many of the blues guitarists on today's scene - that seem to make a living copying what other guitarists recorded on Chess Records 50 or 60 years ago - would listen to his advice as well.

The blues world would be a lot more vital, contemporary and interesting if they did.

I learned a great deal from playing and touring with Son Seals for two years - I admired his commanding stage presence, interplay with horn sections and his all for business "no shtick" interaction with his audience.

I spent more of 80 percent of those gigs with Son just playing rhythm guitar - which every guitarist should be required to do to become a complete player.

Sam Lay was also very encouraging back when I was in my early 20s - and taught me that the color of one's skin has nothing to do with whether or not you can play the blues.

One of the things that keeps me going in this crazy business is that I feel I'm improving and growing as a guitarist and a musician with age. I'm writing more and more and hopefully developing more of my own sound and style over time.

Q - What do you think of the Chicago blues scene compared to other blues scenes around the country? What can be done to boost the interest in blues music in general?

Well, Chicago still probably has more places to play and hear blues than anywhere in the world. The tourist element has watered down the scene, but there are still some excellent players here.

Having come up on the scene in the '80s when you could hear blues like Otis Rush, Buddy and Junior, Lonnie Brooks, Magic Slim, Hubert Sumlin, Sunnyland Slim, Jimmy Rogers and Pinetop Perkins on a weeknight or every weekend, I'd have to say that today's scene doesn't quite measure up.

I think the overall interest in blues music is fairly strong - although it's still, and probably always will be - an alternative musical form.

Another crossover artist like Stevie Ray Vaughan is probably what's needed to garner more attention for the blues today...let the purists cringe - but that's what it will take for the blues to reach a wider audience.

Q - You've played and recorded with so many musicians over the years, including Pinetop Perkins, Otis Rush and Buddy Guy. Do you have any dream projects or collaborations?

Thanks. I feel lucky to have gown up here in Chicago. Other than wishing I could enter a time machine and play behind Muddy - or play a few tunes with B.B. King while he's still with us, I'd love to collaborate on a project bringing musicians from Chicago and New Orleans together.


Two of my favorite musical places on earth, with very different - yet similar and soulful - musical sounds and styles.

Posted by Eric Schelkopf at 8:43 AM